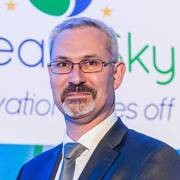 Jean-François graduated from Faculté Polytechnique de Mons (Belgium) in 1994 as a Mechanical Engineer. He holds a Master-after-Master in Fluid Dynamics & Turbomachinery from the von Karman Institute (Diploma Course 1995) and holds a PhD in Unsteady Measurement Techniques for Turbomachinery from Université Libre de Bruxelles.

Jean-François has been working for 20 years at the von Karman Institute as a Research Engineer, Assistant Professor and for the last 10 years, as Associate Professor in the Turbomachinery and Propulsion Department.

He has been a founding member and Secretary General of EVI-GTI (European Virtual Institute for Gas Turbine Instrumentation) from 2004 to 2014. He also served as Co-Chair of several NATO and ISA Working Groups on Gas Turbine Instrumentation AVT-180, AVT-229, ISA 107.5 until 2014. As an ASME member, he has been actively involved in the IGTI/Turbo Expo Conference Committees and reviews, likewise with the European Turbomachinery Conferences.

In November 2014, he joined the Clean Sky 2 Joint Undertaking as a Project Officer, responsible for the engine research programmes SAGE and ENG. In September 2018, he became Team Leader, responsible for Engines, Systems and Technology Evaluator.

In May 2019, he has been appointed Chief Scientific Officer and since January 2022, Head of the Technology Office of Clean Aviation, in charge of technical coordination and knowledge management, technology strategy and impact monitoring.

All session by Adam Dissel