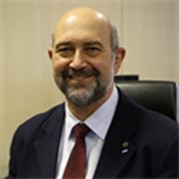 Azevedo has graduated in Aeronautical Engineering at Instituto Tecnológico de Aeronáutica (ITA) in 1981, and he holds M.S. (1983) and Ph.D. (1988) degrees in Aeronautics and Astronautics Engineering from Stanford University. He is a Senior Research Engineer at Instituto de Aeronáutica e Espaço (IAE), an institute of the Department of Aerospace Science and Technology (DCTA) of the Brazilian Air Force, and an Adjunct Professor at ITA. He is a Fellow of the American Institute of Aeronautics and Astronautics (AIAA) and a member of the National Academy of Engineering in Brazil. He is currently the President of the International Council of the Aeronautical Sciences (ICAS). He has experience in Aerospace Engineering, with emphasis in Aerodynamics and Aeroelasticity, and his research focus encompasses computational aerodynamics, computational aeroelasticity and CFD.